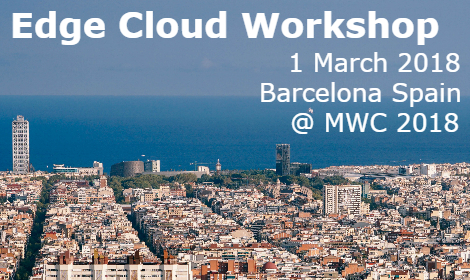 Complimentary registration through this EDAS link.
Please create a login account with EDAS at this link.

The IEEE 5G Roadmap Edge Automation Platform (EAP) Working Group has been initiated within the IEEE 5G initiative. The mission of the IEEE 5G EAP WG is to establish an open reference architecture framework and identifya  short (~3 year), mid-term (~5 year) and long-term (~10 year) roadmap in collaboration with respective industry consortia.

In the series of workshops held around the world, a detailed scope for EAP has been established as an open reference architecture for a cloud platform that uses compute, storage, and network (e.g. fixed and mobile) resources distributed across multi-access edge (including the user equipment/device) for support of QoE and locality relevant applications. It includes a framework for real-time control, orchestration, policy, and management functions for dynamic allocation and management of these resources and the enabled services.

An EAP working session has been planned on March 1st, collocated with the MWC in Barcelona with an objective to bring together scientists and architects from Service Providers, Academia, and Open Industry forums to facilitate industry alignment on Edge Cloud technology roadmap and guide the scope and charter of IEEE 5G & Beyond EAP WG.

Cagatay Buyukkoc graduated from METU, Ankara, Turkey with EE BS and MS degrees and a PhD degree from University of California, Berkeley in EECS. He is a Fulbright/Tubitak scholar. He also obtained an Executive MBA on International Business from Wharton. He held various technical and management positions in AT&T Bell Labs, Lucent Technologies, ZTE, Cisco, ALU/Lucent Technologies/Bell Labs and AT&T Labs. He is the first to introduce SDN ideas into AT&T and led the Preindustrial committee of IEEE SDN Initiative that worked 2014-2017. He also led the Software Defined ecosystem to extend to RAN, and was influential in the formation of xRAN and related alliances.. He works for AT&T Architecture and Design organization as a Lead MTS, leading efforts on various SDN/NFV frameworks and RAN evolution target architecture, and ONAP –edge efforts. He also co-leads the IEEE 5G Initiative, Edge Automation Platform workgroup.

Mansoor Hanif joined EE in November 2011 and led the technical launch of the 1st 4G network in the UK and was also accountable for the integration of the legacy 2G and 3G Orange and T-Mobile networks. Until 2016 he led the team who plan, design, rollout, optimize and operate all EE radio access networks, including Mobile Backhaul and Small Cells, and was accountable for the coverage aspects of EE’s Emergency Services over LTE program. He was also a board member of MBNL (the joint venture of EE with H3G) until 2016. During the acquisition of EE by BT, Mansoor led the EE network Integration team and is currently Director of the Converged Networks Research Lab based in BT’s Global Research center in Adastral Park. He is a member of the BT Technology Steering Board, Scottish Innovation Programme, Intel Technical Advisory Board and alternate board member of the Telecom Infra Project (TIP).

Jason Hoffman is the Chairman and CEO of MobiledgeX, a Deutsche Telekom subsidiary focused on edge computing. Previously he was a CTO at Ericsson AB and was P&L responsible for their cloud and datacenter infrastructure business. While at Ericsson his group created the world’s first hyperscale, disaggregated system and led the market in the modernization of telecom infrastructure. Prior to Ericsson, he was a founder and the CTO at Joyent (now owned by Samsung), a pioneering high performance cloud IaaS and software provider, where he ran product, engineering, operations and commercial management for a decade. Joyent launched the world's first container-as-a-service offering in 2004, the most popular asynchronous runtime (node.js) in 2009, the most secure KVM-based VMs in 2009 and the world's first serverless offering in 2013. He is considered to be one the pioneers of large scale cloud computing, in particular the use of container technologies, asynchronous, high concurrency runtimes and converged server, storage and networking systems.  Jason is also an angel investor, strategy and execution adviser, venture and private equity adviser and has served on the boards of companies and foundations. Jason has a BS and MS from UCLA and a PhD from UCSD. He lives in the Bay Area with his wife and children.

Chih-Lin I received her Ph.D. degree in electrical engineering from Stanford University. She has been working at multiple world-class companies and research institutes leading the R&D, including AT&T Bell Labs; Director of AT&T HQ, Director of ITRI Taiwan, and VPGD of ASTRI Hong Kong. She received the IEEE Trans. COM Stephen Rice Best Paper Award, is a winner of the CCCP National 1000 Talent Program, and has won the 2015 Industrial Innovation Award of IEEE Communication Society for Leadership and Innovation in Next-Generation Cellular Wireless Networks. In 2011, she joined China Mobile as its Chief Scientist of wireless technologies, established the Green Communications Research Center, and launched the 5G Key Technologies R&D. She is spearheading major initiatives including 5G, C-RAN, high energy efficiency system architectures, technologies and devices; and green energy. She was an Area Editor of IEEE/ACM Trans. NET, an elected Board Member of IEEE ComSoc, Chair of the ComSoc Meetings and Conferences Board, and Founding Chair of the IEEE WCNC Steering Committee. She was a Professor at NCTU, an Adjunct Professor at NTU, and currently an Adjunct Professor at BUPT. She is the Chair of FuTURE 5G SIG, an Executive Board Member of GreenTouch, a Network Operator Council Founding Member of ETSI NFV, a Steering Board Member of WWRF, the ComSoc Rep of IEEE 5G Initiative, a member of IEEE ComSoc SDB, SPC, and CSCN-SC, and a Scientific Advisory Board Member of Singapore NRF. Her current research interests center around “Green, Soft, and Open”.

Sachin Katti is an Associate Professor of Electrical Engineering and Computer Science at Stanford University and also the Director of the xRAN Foundation. He is also Co-Founder and ex-CEO of Kumu Networks which is commercializing his research on full duplex radios. He received his PhD in EECS from MIT in 2009. His research focuses on designing and building next generation high capacity wireless networks by combining techniques from information and coding theory, RF systems, and networking.  His research has won numerous awards, including the 2008 ACM Doctoral Dissertation Award - Honorable Mention, the George Sprowls Award for Best Doctoral Dissertation in EECS at MIT, the IEEE William Bennett Prize, the Best Student Paper Award at ACM SIGCOMM 2012, USENIX ATC 2013, the Sloan Fellowship, the NSF Career Award as well as Okawa, Hooover, Packard and Terman Faculty Fellowships.

Prior to Stanford, Guru spent four years at the National Science Foundation (NSF) and worked with the broader research community to create programs such as GENI, Future Internet Design, and Network of Sensor Systems. Guru received NSF Director's award for Program Management excellence. Before NSF Guru founded several startups including Growth Networks (acquired by Cisco) and Sceos (IPO’d as Ruckus Wireless). Guru served as Entrepreneur in Residence at NEA in 2001 and received NEA's Entrepreneurship Award. Prior to this Guru spent over 12 years at Washington University in St. Louis where he was a Professor of Computer Science, Director of Applied Research Laboratory and the head of research and prototyping of high performance networking and multimedia systems. Guru received his PhD in Computer Science from the University of Delaware in 1987. Guru is a recipient of the Alumni Outstanding Achievement award and the Frank A. Pehrson Graduate Student Achievement award.

Prof. Rolf Schuster, Director Open Edge Computing Initiative. Rolf is a telecoms- and IT-industry leader with a broad set of experiences from executive roles in large international corporations as well as start-up companies. Currently, Rolf is the Director of the Open Edge Computing Initiative, which brings together worldwide leading telecom companies, to shape the global eco-system of Edge Computing. Rolf is also holding the computer science chair in Embedded Software at the University of Applied Science in Dortmund, Germany. Before, at Vodafone, Rolf was responsible for two Partner Innovation Centres and the Vodafone Research Cooperations on a global scale. As the managing director of two start-up companies Rolf has worked in Belgium as well as Germany. Rolf has published numerous books and articles in the area of video processing, e-business, innovation management, internet payment systems and edge computing.

Luis Velasco received the B.Sc. degree in Telecommunications Engineering from Universidad Politecnica de Madrid (UPM) in 1989, the M.Sc. degree in Physics from Universidad Complutense de Madrid (UCM) in 1993, the Master degree in Business Administration (MBA) from UPM in 2001, and the PhD degree from Universitat Politecnica de Catalunya (UPC) in 2009. In 1989 he joined Telefonica of Spain and was involved on the specifications and first office application of Telefonica's SDH transport network. In 2004 he joined UPC, where currently he is a full professor at the Department of Computers Architecture (DAC) and senior researcher at the Advanced Broadband Communications Center (CCABA). He has co-authored more than 200 papers in peer-reviewed International Journals and Conferences, as well as two books related to Elastic Optical Networks. He is serving as an Associate Editor of the IEEE/OSA Journal of Optical Communications and Networking (JOCN) and in the TPC of several international conferences as well as reviewer of international journals. He has participated in various IST FP-6, FP-7, and H2020 European research projects such as NOBEL 2, e-Photon/ONe+, DICONET, BONE, STRONGEST, IDEALIST, GÉANT, and METRO-HAUL. He received the ICREA Academia award in engineering sciences in 2015. His interests include both service and network layers, including planning, routing, and resilience mechanisms in Big Data ready software defined environments.

Thank you to our Patron for the event: