Registration for this event is now closed.

Sudhir Dixit is a CEO and Co-Founder of Skyoot, Inc, in the space of cloud-based content storage and collaboartion. He is a Fellow and Evangelist of Basic Internet at the Basic Internet Foundation in Norway, and also the Director of Home for Mind and Body - An International Centre for Peace at the CTIF Global Capsule (CGC), located in Rome, Italy. From December 2013 to April 2015, he was a Distinguished Chief Technologist and CTO of the Communications and Media Services for the Americas Region of Hewlett-Packard Enterprise Services in Palo Alto, CA, and prior to this he was the Director of Hewlett-Packard Labs India from September 2009. From June 2009 to August 2009, he was a Director at HP Labs in Palo Alto. Prior to joining HP Labs, he worked in various technical and leadership roles at BlackBerry, Nokia, NSN and Verizon Communications.

Sudhir Dixit has 21 patents granted by the US PTO and has published over 200 papers and edited, co-edited, or authored eight books. He is presently on the editorial boards of IEEE Spectrum Magazine, Cambridge University Press Wireless Series and Springer’s Wireless Personal Communications Journal and Central European Journal of Computer Science (CEJS). He chairs the IEEE ComSoc Sub-Technical Committee on Fiber and Wireless Convergence.

From 2010 to 2012, he was an Adjunct Professor of Computer Science at the University of California, Davis, and, since 2010, he has been a Docent of Broadband Mobile Communications for Emerging Economies at the University of Oulu, Finland. He is a Life Fellow of the IEEE, Fellow of IET and IETE. Dixit received his Ph.D. degree from the University of Strathclyde, Glasgow, U.K. and an M.B.A. from the Florida Institute of Technology, Melbourne, Florida.

Abhay Karandikar is currently Institute Chair Professor in the department of electrical engineering at Indian Institute of Technology (IIT) Bombay. He was the Head of the Department from January 2012 to January 2015. He is the coordinator of Tata Teleservices IIT Bombay Center for Excellence in Telecom (TICET), National Center of Excellence in Technology for Internal Security and also heading IIT Bombay's Research Park. He spearheaded a national effort in setting up Telecom Standards Development Society of India (TSDSI), India's standards body for telecom with participation of all stakeholder. Prof Karandikar is the founding member and currently the Chairman of TSDSI. He has also contributed to important policy initiatives at national level including Five Year Plan, TV White Space, Electronics System Design and Manufacturing. Currently, he is working as a consultant to provide technical expertise in design and implementation of BharatNet. Dr Karandikar has several patents issued and pending, contributions to IEEE, 3GPP standards, contributed chapters in books and large number of papers in international journals and conferences to his credit. Dr. Karandikar is a two time recipient of award for excellence in teaching at IIT Bombay- in 2006 and 2011. He is co-author of papers which won the Best paper awards in ACM MobiHoc 2009, Workshop on Indoor and Outdoor Small Cells WiOpt2014 and finalist for the best paper award in IEEE LCN 2012 and IEEE NCC 2014 conferences. He is also a recipient of 2016 IEEE-SA Standards Medallion.

Daya Kamath is a Principal Engineer in the SDN Systems & Technology group at Ericsson India Global Services Pvt Ltd, R&D division. She is a senior member of the team driving SDN solutions, architecture, design, and product development on the Ericsson Cloud Controller based on the Opendaylight platform. Prior to Ericsson, she was a Senior Technical Staff Member at the Cloud Networking group, IBM, and member, IBM Academy of Technology. Here, she focused on SDN technology and was the lead architect for the IBM SDNVE controller based on Open Daylight. She has also held leadership roles on data center network architectures, IPv6 and other embedded switch functions. Daya has 18 years of experience in the networking industry, including positions at Riverstone Networks, Cabletron Systems and Fore Systems. She holds a MS (Computer Science) degree from Iowa State University, Ames, IA.

Devadas Pai comes with about 15 years of Telecom Industry experience. He has worked on Telecom R&D, Mobile Network Planning and O&M before founding NanoCell in the year 2008 with a passion for teaching telecom technologies. Till date, he has delivered more than 1000 days of training on 4G/3G Networks and IoT across the globe. Devadas has done his engineering from Bangalore university and EPDGM from TAPMI, Manipal, INDIA.

Rajesh Banda obtained his B Tech from Bangalore university and M Tech from BITS Pilani. He has over 16 years of industry experience working with Wipro and Nokia. He had worked with Wipro as System Architect until 2007 and then with Nokia. Rajesh Banda is the Head of 5G Office for Emerging Markets in Nokia. He has many years of experience in Telecommunications and has extensive experience on network technologies, cellular protocols standardization, Systems Engineering and Design. Rajesh currently focuses on business and product development of 5G technologies. He has worked on radio and core technologies with a system analysis and Go-to-Market strategies. He has multiple patent filings in wireless communication technologies.

Ashutosh Dutta is currently Lead Member of Technical Staff at AT&T’s Chief Security Office in Middletown, New Jersey. His more than 25 years of career includes Director of Technology Security at AT&T, CTO of Wireless at a Cybersecurity company NIKSUN, Senior Scientist in Telcordia Research, Director of Central Research Facility at Columbia University, adjunct faculty at NJIT, and Computer Engineer with TATA Motors. He has more than 80 conference and journal publications, three book chapters, and 30 issued patents. Ashutosh is co-author of the book, titled, “Mobility Protocols and Handover Optimization: Design, Evaluation and Application,” published by IEEE and John & Wiley. Ashutosh served as the chair for IEEE Princeton / Central Jersey Section, Industry Relation Chair for Region 1 and MGA, Pre-University Coordinator for IEEE MGA. As the vice chair of Education Society Chapter of PCJS, he co-founded the IEEE STEM conference (ISEC) in 2011 and helped to implement EPICS (Engineering Projects in Community Service) in the high schools within PCJS. Ashutosh currently serves as the director of Industry Outreach for IEEE Communications Society Board of Governors and is the co-lead for IEEE 5G initiative. He was recipient of the prestigious 2009 IEEE MGA Leadership award and 2010 IEEE-USA professional leadership award. Ashutosh obtained his BS in Electrical Engineering from NIT Rourkela, India, MS in Computer Science from NJIT, and Ph.D. in Electrical Engineering from Columbia University, New York. Ashutosh is a senior member of IEEE and ACM.

Ravikiran Annaswamy is Founder and CEO of Innohabit Technologies. He is working on various innovations enabling proximity marketing in real world. He works with young entrepreneurs helping them to get started and achieve market success with focus on impact innovations. He works closely with global programs like Founders Institute (Fi.Co) and Unreasonable Institute as Mentor and Coach for early stage startups. He is on the global team of IEEE 5G Technology Standardization and is responsible for strategy on Taptic Internet, IOT, AR, VR Applications. He has over 22 years of business experience as Entrepreneur and as Business Leader at Nokia Siemens Networks and Siemens AG. He was Business Head for Indian market, led Global Product Management and was General Manager for Asia Pacific Solutions. He championed Intrapreneurship by working as Innovation head for Bangalore site of Nokia Siemens Networks.

He has vast experience of launching successful technology solutions for global markets, mainly in the area of Analytics and Marketing automation, Online
Billing and Charging, Innovative 3G/4G applications, Multimedia and Security Solutions. He is an engaged Professional volunteer, was the Chairman for IEEE Bangalore
section (2014-2015) and Industry Relations for IEEE - Asia Pacific (2014-15). He is currently the Secretary for IEEE R10 and Newsletter Editor for IEEE TEMS.
He is a thought leader and speaker at various prestigious international business conferences. He has done his MBA from Indian Institute of Management, Bangalore and has graduated from UVCE Bangalore. He has been recognized for his work by several awards: Siemens Director’s award for Innovation, Customer management and Project Execution, IEEE Bangalore - Best volunteer award, Runner up at AIMA’s National Contest for Young Managers and Asia finalist at Global Social Venture Competition
conducted by Berkley Haas school of business. 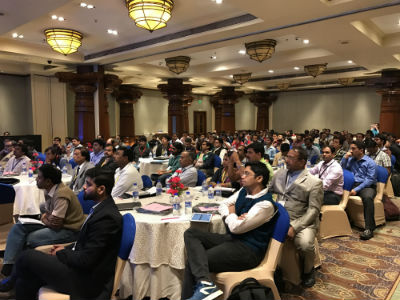 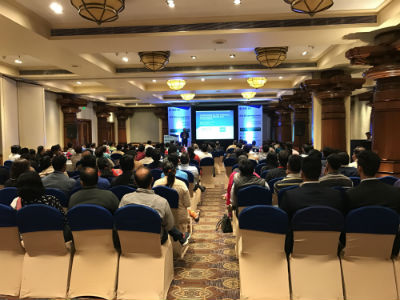 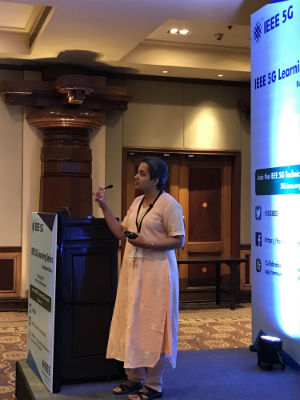