The Future of Mobile Beyond 5G: Part 1 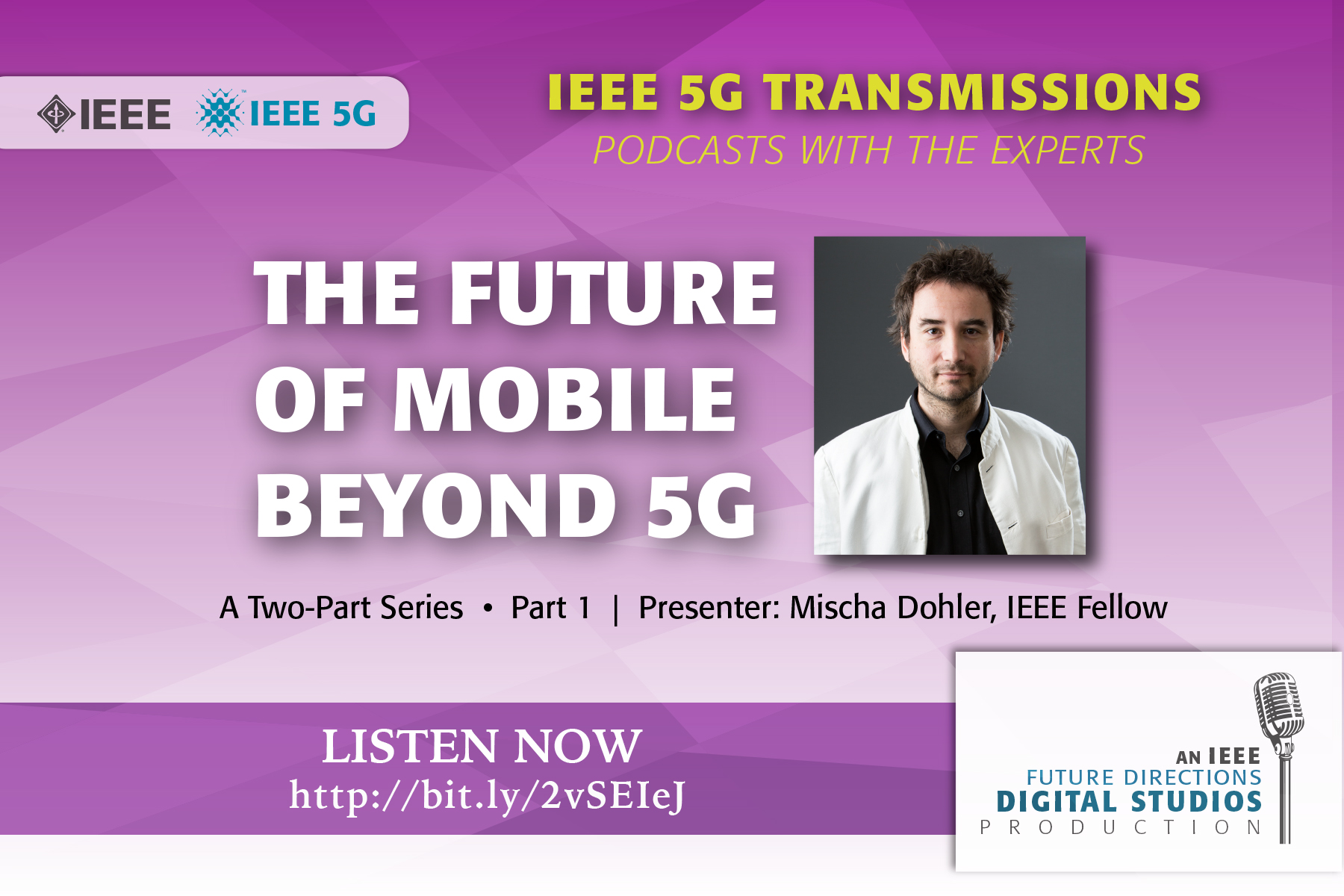 In this installment of the IEEE 5G Transmissions Podcast: Podcasts with the experts, we talk about The Future of Mobile Beyond 5G with Mischa Dohler who is an IEEE Fellow and co-chair of the IEEE 5G Technology Roadmap Committee. He is a professor at King’s College London where he is directing the Centre for Telecommunications Research. Mischa’s vision is based on his experience helping design cellular systems over the past 18 years as part of university, industry and startup jobs.

The mobile industry has enjoyed tremendous growth over the past decades. It has evolved from a niche technology, embodied by an analogue first generation 1G voice system, to a fully-fledged Internet on the move, embodied by an end-to-end digital 4G system. With so many generations of mobile now deployed globally, the technology is starting to become commodity and is naturally experiencing market pressure underpinned by shrinking margins and higher deployment costs.

It is hence useful and timely to pose the question on the future of mobile, a future which goes beyond 5G. Notably, I would like you to understand which technology disruptions are required to enable mobile not only to survive but to thrive in an increasingly competitive technology and business landscape.

Now, let’s start with some trends: Decades of mobile development, deployment and usage allows us to draw fundamental trends: The first relates to an increase in orders of magnitude of the system key performance indicators, the KPIs. The second relates to the major constituent of capacity increase over past decades.

Let’s start with the first one: And the interesting fact here is that the KPIs of cellular have evolved in a rather consistent way from generation to generation. The most important ones are data rate, number of connected devices and delay/latency. Each of these have increased or decreased by one to two orders of magnitude from generation to generation. Notably, the downlink data rates evolved from 2G to 3G to 4G respectively from about 100kbps to 170Mbps to 1Gbps; the number of devices from hundreds of devices to 10,000 devices per km2; and latency has been reduced from almost 300ms to 100ms to 10ms.

5G and the evolutions thereafter are unlikely to follow a different trend. The International Telecommunication Union (the ITU) is shaping the requirements to be fulfilled by the future mobile generation in the IMT-2020 programme. While the recommendation is still being discussed, we can extrapolate some KPIs from the different use cases and applications. In particular, for the 5G downlink: data rates will be 10Gbps, the number of devices per km2 will be about 100,000, and the latency will be about 1ms for ultra-low latency use cases. I want you to understand that, for the first time, these numbers overstep some fundamental thresholds which make 5G very interesting for stakeholders which traditionally were not associated with cellular technologies.

Indeed, the extremely high number of devices (and optimised power consumption) allows 5G to enable the emerging Internet of Things (IoT) which requires billions of end-points to be connected. Given the global coverage, along with mobility and roaming support, 5G is hence consolidating as a serious candidate to enable the IoT.

Furthermore, the very low latencies and ultra-high reliability, enables critical applications to be serviced. Given the ability to offer service level agreements (that is SLAs), 5G is hence also consolidating as a serious candidate to enable Industry 4.0 applications.

Therefore, the evolution of the KPIs will allow 5G not only to address consumer needs but also a wide range of industry use cases.

Concerning the 2nd fundamental trend, let’s examine the breakdown on the increase of wireless capacity over the past three decades. We shall make use of Martin Cooper’s law which says that wireless capacity doubled every 30 months over the past 100 years with overall million-fold increase in capacity since 1957, with the breakdown of these gains being: 5 times due to the physical layer enhancements, 25 times due to spectrum, and a whooping 1600 times due to the massive deployment of reduced cells. Overall, it indicates that smaller cell sizes are by far the biggest contributor, followed by the availability of spectrum; all the other factors however remain negligibly small. In particular, the physical layer has only contributed roughly 0.3% to the increase in capacity when compared to that of the smaller cell sizes, whereas spectrum accounts for 1.5%. It is due to these smaller cell sizes that cellular has become much more heterogeneous, and this trend is to continue, if not accelerate with 5G and beyond.