The Future of Mobile Beyond 5G: Part 2 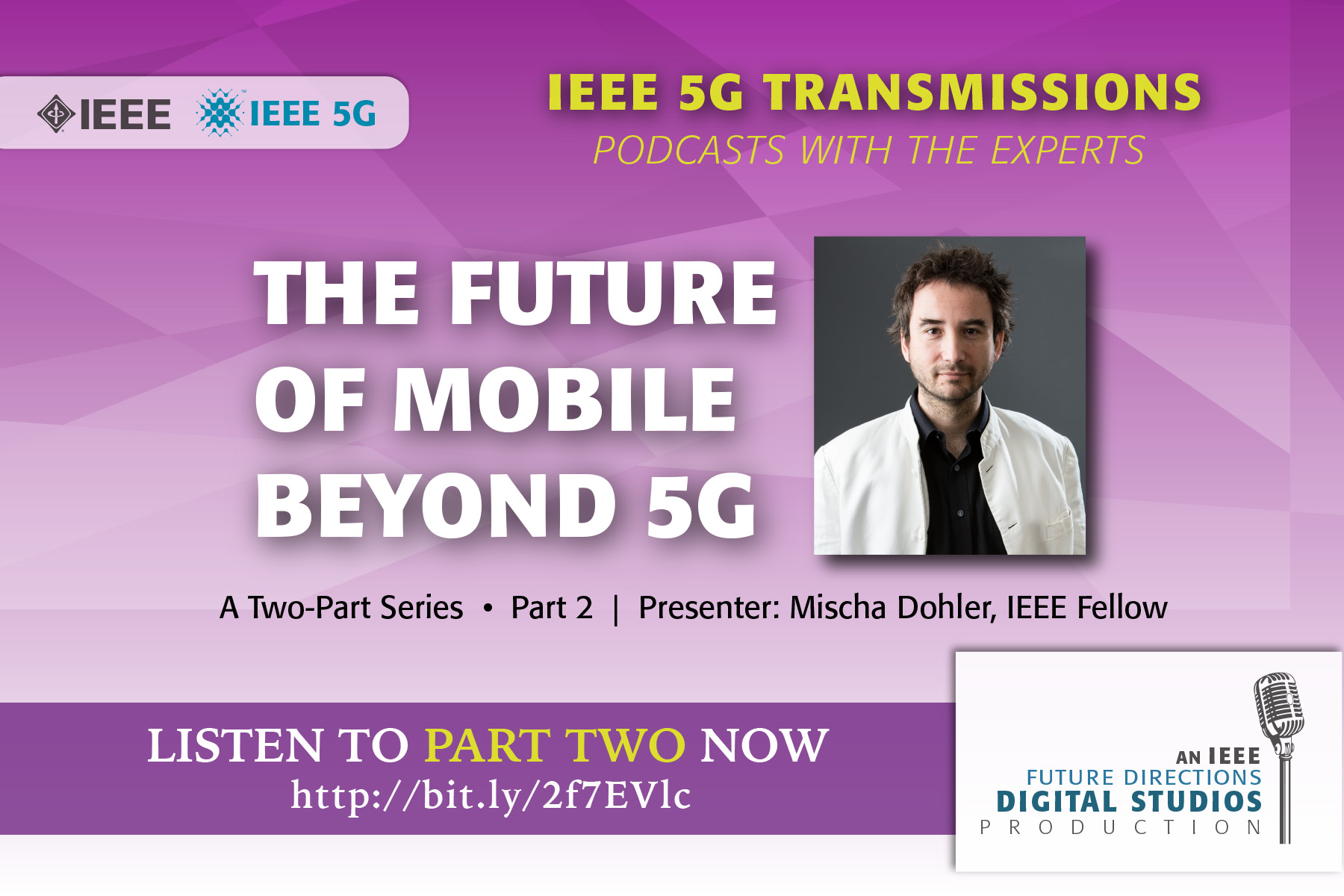 This is the second installment of the IEEE 5G Transmissions: Podcasts with the Experts "The Future of Mobile Beyond 5G" with Mischa Dohler who is an IEEE Fellow and co-chair of the IEEE 5G Technology Roadmap Committee. He is a professor at King’s College London where he is directing the Centre for Telecommunications Research. Mischa’s vision is based on his experience helping design cellular systems over the past 18 years as part of university, industry and startup jobs.

Part 1 of this recording is available here.

So, let’s spend some time to discuss technology disruptions which are needed to keep up with past trends and which ensure that telecoms does not become total commodity.

The first disruption is that we need to move from hard KPIs to the perception of KPIs. Indeed, with decreasing cell sizes and increasing traffic demand, it will become more and more difficult to offer satisfactory designs on rates, outage or delay. Therefore, I advocate for a fundamental change in the design approach where systems are not designed and regulated based on the measured KPI but on the perceived KPI.

Let us take the example of data rate. In a future 5G system, the majority of the capacity will be provided via some high capacity small cells using millimetre wave technologies. However, providing ubiquitous radio frequency coverage to satisfy such capacity increase is both technically challenging and economically prohibitive. One possible solution here is to use predictive analytics on different metrics, such as: consumer data usage behaviour, user movement behaviour or speed of movement. That would allow one to implement, for example, enhanced caching techniques which allow to provide service continuity in the case of a coverage hole, and buffer the to-be-watched Netflix or Youtube video until the next access point is reached. Several technical challenges need to be addressed here, with the most notable being that the application layer needs to communicate with lower link layers so as to execute the best strategy. Strategies based on the use of software defined networks (i.e. SDN) for dynamic QoS management can be further enhanced with predictive analytics to provide accurate on demand resource allocation.

Let’s move from user perception to the first segment in the tech chain, i.e. spectrum. Spectrum has been managed over past decades in two regimes: licensed (i.e. operators purchase spectrum rather expensively) or license-exempt (i.e. anybody can use it as long as simple rules are obeyed). Numerous studies have established that spectrum as a whole however remains poorly utilized.

What about managing spectrum in an unprecedented way through distributed ledgers, like used for block chains? This combines prior work on dynamic spectrum management, TV White Spaces, spectrum databases and blockchains. We would reach a new level of atomized spectrum ownership at a spatial and temporal granularity not seen before. You could be an operator, so could I, so could a small business. And all could be seamlessly managed in a trusted environment, ensuring maximum capacity and minimum interference. Wow!

Now, let’s talk about the next tech element, the radio access networking architecture where we have pioneered a novel atomized and decoupled architecture. Traditionally, due to homogeneous cell sizes, downlink and uplink were associated to the same base station. We have found out that under heterogeneous settings, decoupling both where uplink goes to a microcell base station and downlink comes from a macrocell not only gives great capacity gains but more importantly decreases outage by 1-2 orders of magnitude. The concept is called DUDe and we believe it to be a transformational design approach in cellular.

Let’s move on to the Core Network, where I have been advocating for years for a thinning of the core networking infrastructure.

Now, we have the CN today in 4G because we had it in 3G; we had in 3G because it was there in 2G. And the reason it was there in 2G is because at those pre-Internet times none of the operators believed that there will ever be a general Internet which would be able to carry the voice traffic. 30 years on, we still use the CN and thereby greatly limit the scalability of the wireless edge, which – because of above discussions – limits the rates to be delivered.

Capitalizing on this insight as well as recent trends to virtualize the enhanced packet core (vEPC) functionalities, the next step ought to be to push the entire cellular CN system to the edge: first, into the emerging Cloud-RANs; and later into the edge devices. This approach would allow to scale and – importantly – significantly decrease the end-to-end delay between operators.

And finally, I would like to introduce the concept of “Self-Designing Cellular Systems”.

With advances in artificial intelligence (AI), software defined radio/networks (SDR/SDN) and robotics, there is no reason why cellular system couldn’t evolve their own design and deployment. Whilst research on best possible technology solutions can still be conducted by humans, future cellular systems should be able to scout the publication/innovation databases such as IEEE Xplore, extract the most promising solutions, self-upgrade these (using SDR/SDN) and/or self-deploy them (using autonomous drones, for example). This would allow the standardization cycles to be shortened from years to days if not minutes.

Now, to finish off:

For these technology disruptions to take place, significant changes in the underlying innovation ecosystem are advisable. Without going into great details, I believe we first need a much stronger industry co-design approach; and second, we need to open up standards to accelerate the standardization cycles.

And finally, a thought for you to ponder about: Don’t you think we should innovate the regulators so they can properly regulate innovation in the 21st century?

Thank you for listening! And please do reach out via Twitter or email if you have feedback or ideas. Thank you!

If you want to know more about my thoughts, please, consult a paper published in 2017 as part of the EuCNC conference with a softcopy available from my website www.mischadohler.com.