Abstract
Driven by the increasing use of emerging smart mobile applications, mobile technology is continuously and rapidly advancing towards the next generation communication systems such as 5G and 6G. However, the transport network, which needs to provide low latency and reliable connectivity between hundreds of thousands of cell sites and the network core, has not advanced at the same pace. This article provides insight into how we can solve the fundamental challenges of implementing cost-optimal transport and 5G and beyond mobile networks simultaneously while satisfying the network and user requirements irrespective of the radio access network's architecture.

1. Introduction
The fifth generation (5G) mobile technology promises higher bandwidth capacities, lower latencies, and higher reliability for emerging time-sensitive and mission-critical applications [1]. According to Cisco, the number of connected devices will reach 500 billion by 2030, a number significantly higher than the expected world population. Providing connectivity for billions of devices and satisfying the stringent quality of service requirements of diverse applications is becoming a significant challenge. To address this ongoing issue, academia and industry recently started researching the sixth generation (6G) mobile technology [2].

6G mobile technology expects to provide 100 Gbps or higher data rates and ultra-low latency over ubiquitous 3D coverage areas. However, the transport network, which interconnects the cell sites with the network core, has not progressed at the same pace. For this reason, it has been identified as a potential bottleneck for high-performance and cost-efficient network deployment. Therefore, in order to fulfill the new and miscellaneous requirements of 5G and beyond mobile networks that are arising from the deployment of hundreds of thousands of wireless cell sites, increasingly diverse architectures, and sophisticated applications and services, “the transport network will require to undergo an evolutionary change with a complete rethink of the design and deployment strategies”.

In particular, optical technologies are positioned to be the most sustainable for the transport segment of 5G and beyond networks due to their inherent features such as secure data transmission and high capacity [3]. However, with the decreasing cell size and higher numbers of cells deployed, it becomes harder and more expensive to connect them to the network core with the optical network [4]. This is made even more challenging, given the diverse architectural requirements of radio access networks (RANs) of next-generation (xG) mobile networks [5]. Therefore, new methods are needed to jointly plan and design an xG RAN with its transport network while reducing the cost and meeting all the service requirements. In this article, we present new strategies that we can be applied to plan a 5G/6G network together with its optical transport infrastructure to provide ubiquitous, reliable, and cost-effective access for emerging applications. 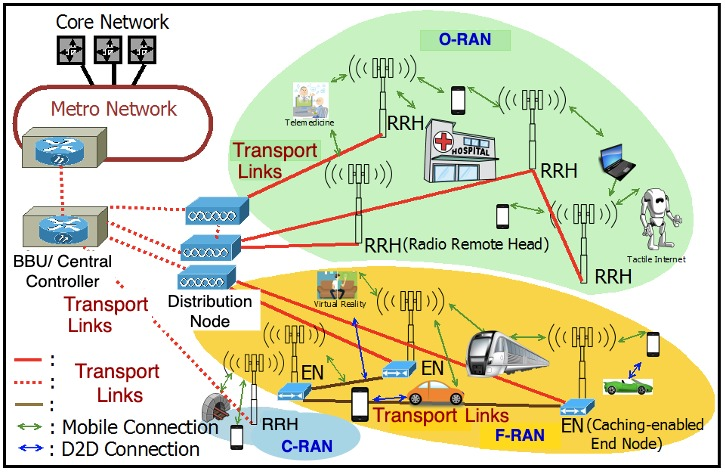 Figure 1. Radio Access Network Architectures for 5G and Beyond

The centralized RAN (C-RAN) is one such paradigm in which the processing of mobile signals is carried out at the centralized base band unit (BBU) placed at the central office (CO). Consequently, in C-RAN, the remote radio heads (RRHs) placed at the cell sites have a very limited set of functions [6]. With the help of virtualization technology few other variants of C-RAN have been proposed and standardized including Open and Intelligent RAN (O-RAN) and fog RAN (F-RAN) [7,8]. In these RANs, the BBU can be further separated and radio control functions can be moved into the cloud, while the radio processing functions remain closer to the cell site, enabling functionalities like network slicing [7].

There is one thing in common irrespective of the RAN architecture in use, that is the requirement of reliable and cost-effective data transportation between RRH and CO. Each of these RAN architectures have different functions at BBU, the RRH and/or distribution node placed between the RRH and CO. These different options are standardized under the IEEE 1914 Next Generation Fronthaul Interface – NGFI (x-haul) [9]. Figure 2 shows 10 different RAN functional split options under consideration. For example, O-RAN considers functional split options 7.2 and 6 [7].

Now the challenge is to find the cost-effective and efficient transport network solution because different optical technologies can be used in the transport network depending on the x-haul bandwidth requirement. For example, up to Option 7.3, we can use the cost-effective point to multipoint (PMP) optical links such as passive optical networks (PON) and low data rate point to point (PtP) optical links. However, beyond Option 7.3, we have to use multiple high capacity PtP optical links [11]. In order to achieve the cost-effectiveness and effective operation, we now need to deploy several functional split options and optical technologies in a single network. This is a major challenge.

Therefore, we developed a generalized optimization framework that can be used to jointly plan both 5G wireless and optical transport network for all the functional split options whilst satisfying diverse network requirements such as coverage and capacity. Our framework is also capable of leveraging the resources associated with existing infrastructure to reduce cost and can be used in situations where we have limited availability of existing fiber resources. So that we can apply the framework to analyze the deployment cost and optimally plan the network under any given scenario and to identify the most effective design option. We develop the framework as an integer linear program. In this article, we present an overview of the framework. The details of the mathematical formulation of the framework can be found in [12]. 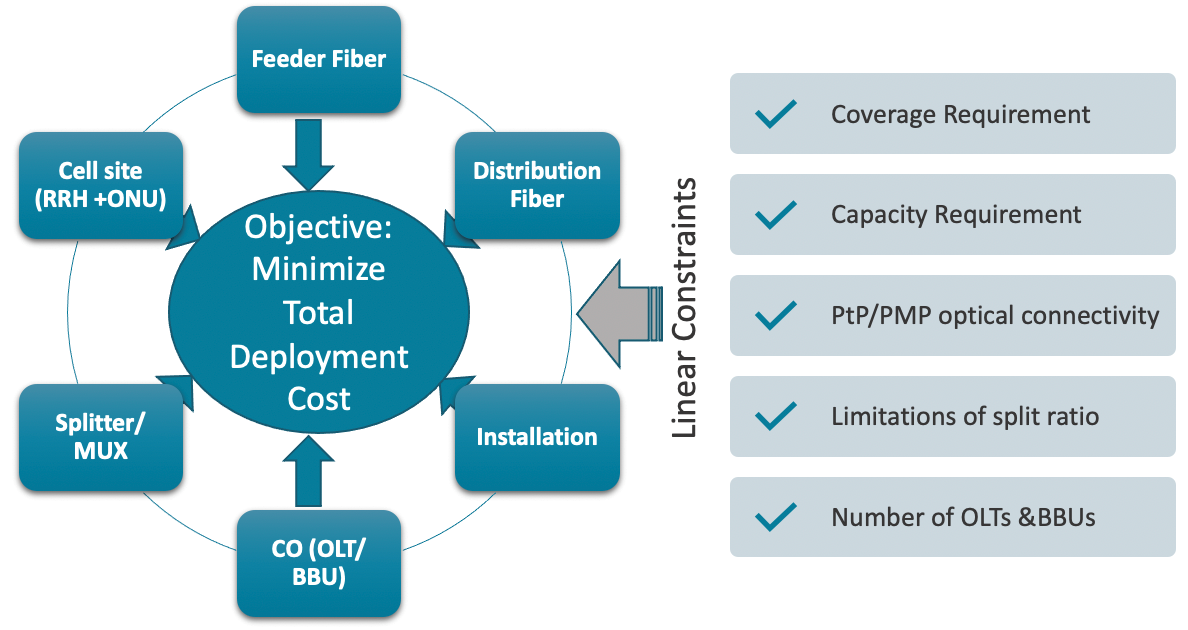 Figure 3 illustrates the major components of the framework. As can be seen, the objective of the model is to minimize the total deployment cost of both 5G and its optical transport network. The total deployment cost consists of the cost of feeder fiber, the cost of distribution fiber (deployment of new fiber routes including trenching), the cost of equipment and installations we need at several locations such as CO (BBU, Optical line terminal (OLT) and line cards), splitter location (Splitter /MUX) and cell site (RRH and Optical network unit (ONU)). The framework also consists of multiple constraints to satisfy the network requirements such as coverage, capacity, split ratios, PtP/PMP connectivity and number of BBUs and OLTs in one location. The framework outputs the optimal locations of RRH/ONUs, splitters/MUXs, BBU placement and optimal fiber routes to deploy transport network.

Figure 4. (a) Data set (b) Example of an optimal solution

We then validate our framework by using it to plan 5G and its optical transport network for a suburban area in Eastern Australia. The map of the considered suburban area with over 6000 residents is shown in Fig. 4 (a). The major intersections shown in brown dots are the possible locations for cell deployment, where a light pole/traffic light pole can be used to easily deploy small cells. Orange triangles are the existing fiber access points which are considered as the possible locations for splitter/MUX deployment and black squares are the locations of existing COs. The cost components we applied for the analyses can be found in [12].

We also analyzed the optimal deployment cost under different deployment scenarios as we wanted to find how the optimal cost varies with network requirements such as capacity, cell radius, coverage, and functional splits. Here, we highlight two sets of results. Figure 5 shows the normalized optimal cost under different optical transport networks and different cell radius. In this scenario, we set the coverage requirement to 99% and per user capacity requirement to 50 Mbps. We also consider different splits of DWDM PON and look at how the deployment cost is distributed among optical x-haul and wireless network. It can be seen that x-haul contributes to higher cost compared to the wireless network. For all the cell radius considered, 10G DWDM PON options save 30% of the deployment cost compared to the 10G PtP deployment. 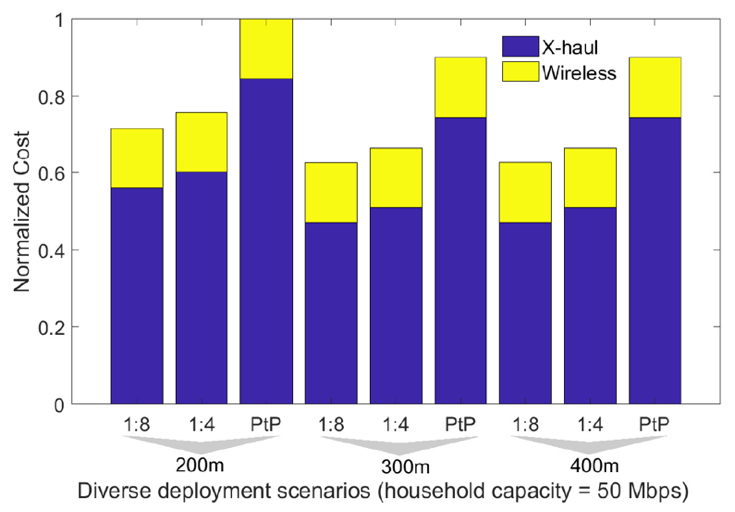 Figure 5. Optimal cost with 10G WDM PON and PtP used as a transport network with coverage 99% 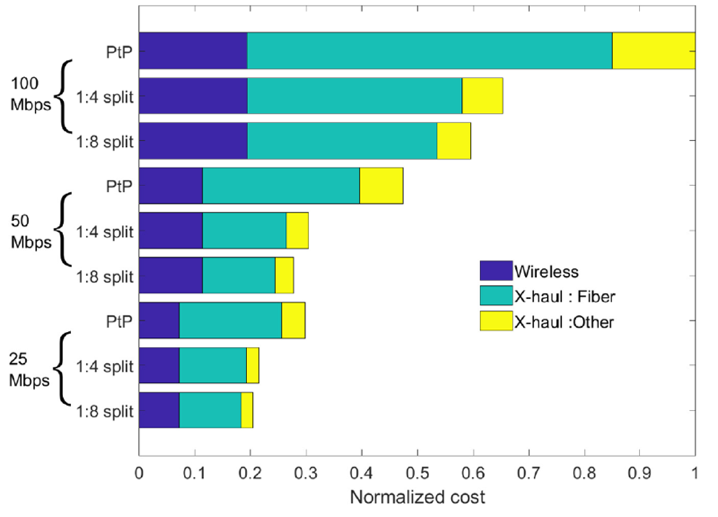 After analyzing our results, we have identified that functional split Options 1-6 utilizing PON-based solution can save 30-40% of deployment cost compared to Option 7.2. The details of the evaluation results can be found in [12]. Most importantly, we developed a tool that can be used to optimally plan a 5G/6G and its transport network by simply entering the relevant cost values and the network requirements such as expected coverage percentage, capacity and split ratio.

4. Conclusion
This article highlighted the importance of joint optimal planning of optical transport and wireless networks considering the diverse network requirements in realizing cost-effective deployment of emerging mobile networks. We presented a versatile framework that can be used to provide a cost optimal solution irrespective of the functional split or optical technology in use. The research work presented in the article provide insight into best network design strategies that can be used in planning and dimensioning of optical transport networks for 5G and beyond networks.

Chathurika Ranaweera received her BSc and PhD degrees in Electrical and Electronics Engineering from The University of Peradeniya, Sri Lanka and The University of Melbourne, Australia, respectively. She is currently a senior lecturer at Deakin University, Australia. Her research interests include optical-wireless convergence, optical transport network architectures for 5G/6G, IoT connectivity, network optimization, quality of service management, and Smart Grid communication.