The race for the first pre-commercial 5G system has started with exciting solutions emerging in the US, Asia and Europe. This article exposes the plans of development and rollout of the world’s first end-to-end 5G system in the UK. The uniqueness of this initiative is that it is conducted across different academic institutions, all collaborating with different vendors and operators, and placed in different cities. A successful completion will prove viability and scalability of 5G within a very heterogeneous ecosystem.

5G will be a transformative system for economy and society. 5G will not only be for consumers but it will also provide the fabric of connectivity between many critical national infrastructures and industries. For this reason it is not surprising that 5G has become part of the national strategy of many governments.

The transition from 4G to 5G will be fundamentally different to the transition from 3G to 4G or 2G to 3G, since earlier networks were mainly aimed at the mobile communications market. 5G networks will not only provide improvement to broadband data rates (approximately 2 orders of magnitude compared to 4G), but will also enable guaranteed ultra-low latency, high reliability and mass connectivity of a wide variety of devices. These are the main differentiations between 5G and previous generations of network.

The 5G fabric of connectivity will enable seamless integration of all network assets (wired, wireless, computing and storage) and convergence between fixed and mobile networks.  Harmonious connectivity will also be provided across the licensed and licensed exempt bands. 5G networks promise continuous connectivity for people and things at home or on the move and will provide the perception of 100% coverage.

From a consumer perspective, a significantly improved experience is expected which – so we hope – will provide always wireline experiences independently if provided by fiber (at home) or wireless (on the move). From an industry perspective, however, 5G will be different in that its technical capabilities will surpass thresholds for the first time, which makes it beneficial for industries looking to roll out critical control applications as well as massive IoT deployments.

5G is expected to make a substantial contribution to the world’s GDP with some estimates going as far as double digit percentages. Research, innovation and standardization in 5G are accelerating at global scale. The contribution of this article is to review the global 5G landscape and to position some of the UK’s remarkable 5G governmental, as well as R&D, developments.

As noted in [1], global collaboration is needed for 5G to succeed. Some countries (such as USA) are taking a mostly commercial approach, whereas others (such as China, South Korea and Japan) are government led and include investment and engagement of national companies and resources.

Notably, the EU announced in February 2016 that it would develop a 5G action plan to put Europe at the forefront of deployment of standardized 5G networks by 2020; and is currently considering €800bn for digital infrastructure investment in Europe over the coming years. The US government recently announced a $400m investment in 5G.

In terms of tangible deployments, South Korea, a 5G thought leader and a pioneer of customer equipment design, has clear objectives linked with 2018 technology deployment at the Winter Olympics. Japan’s leading operator is engaged with the 5G eco-system supply chain and is committed to supplying 5G services as part the 2020 Summer Olympics. And China is offering a strong R&D proposition and has a leading manufacturing capability; it is expected to be a leader in IoT and also enjoys strong government support.

As noted in [1], the UK Government’s 2016 Autumn Statement announced £1.1bn of new funding to boost the UK’s digital infrastructure, including funding for a new program of 5G and fibre trials. The Government has committed to set out more detail on this program at Budget 2017, alongside a new National 5G strategy. The strategic 5G phases are outlined in Figure 1. 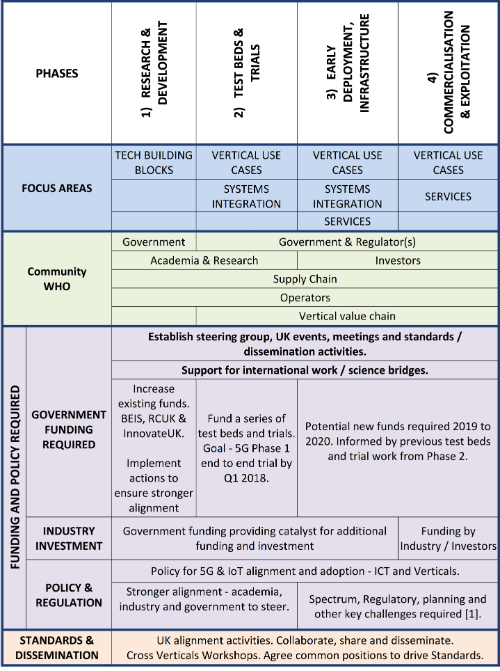 Figure 1: UK’s 5G strategy which includes four phases from research to commercialization from 2017-2020 [1].

Recognized by government and industry, three universities – namely King’s College London, University of Surrey and University of Bristol – are at the forefront of 5G developments in the UK. The University of Surrey established in 2012 the “5G Innovation Centre (5GIC)”, which is funded by £12 million from HEFCE (the Higher Education Funding Council for England) and has over £68 million co-investment from the Centre’s industry and regional partners, including the EM3 Local Enterprise Partnership [2]. The University of Bristol’s Smart Internet Lab [3] is at the forefront of optical and 5G research and leads the “Bristol is Open” smart city project – with the pioneering vision of a “programmable city” – and funded at £75 million through co-investment from central, local government (including the West of England LEP) and Industrial partnerships [3]. King’s is driving the vision of the ultra-low latency 5G Tactile Internet developments with applications to the Internet of Skills; it is also pioneering 5G end-to-end system designs and several important 5G co-design approaches which are all hosted in the £100m+ refurbished Bush House [4]. All three partners have projects addressing the usage of 5G technologies in industry verticals, such as Smart Cities, Smart Transport and Connected Cars, Health, Performing Arts, Gaming, among others.

The outputs from each institution has been tremendous to-date and includes numerous highly cited transactions/magazine papers; pioneering technology developments such as the world’s record on spectral efficiency or real-time SDN slicing protocols; several important standards contributions to 3GPP/ETSI/IEEE and patents; large galvanized industry ecosystem; significant press coverage; many demos at industry events; keynotes and policy contributions; as well as spin-outs. In addition, each has their own collaborative network with many other leading UK universities, such as Lancaster, Edinburgh, UCL, Imperial, York, Newcastle, Cambridge, Sheffield, Strathclyde, Leeds, Queens Belfast; as well as international partners such as TU Dresden, TU Munich, Lund University, among many others.

The recent alliance struck between these three leading academic teams is a significant step forward. It allows the creation of the world’s largest 5G research, innovation, trial and testbed environment and enables system designs to be tested and scaled under stress. The high-level 5G architecture connecting these institutions is shown in Figure 2, along with the complementary developments in technology and enabled use-cases. 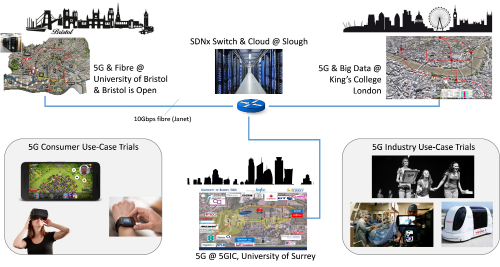 Figure 2: Connectivity across the institutions, and examples of thereby enabled 5G use-cases/case-studies.

Designing this next generation communications system does not come without risks. A few important challenges are summarized below:

In summary, 5G is not only about new RF technologies, and it is not simply more of the same. 5G is also about new architectures for providing end-to-end services and the support of new usage patterns and business models. It will be as much about technology development (standards, products, rollouts) as about customer/end-user education.  The UK government’s announcement of a £1.1bn investment in next-generation digital infrastructures will give a major boost in developing and deploying these technologies, and making a real difference to consumers and industries alike.

Mischa Dohler is full Professor in Wireless Communications at King’s College London, driving cross disciplinary research and innovation in technology, sciences and arts. He is the Director of the Centre for Telecommunications Research, co-founder of the pioneering smart city company Worldsensing, Fellow of the IEEE, the Royal Academy of Engineering and the Royal Society of Arts (RSA), and a Distinguished Member of Harvard Square Leaders Excellence. He is a frequent keynote speaker, and has received numerous awards. He has pioneered several research fields, organized and chaired numerous conferences, was the Editor-in-Chief of two journals, has more than 200 highly-cited publications, authored several books, and co-enabled research funding of $.12bn.

Dimitra Simeonidou is full Professor and Head of the High Performance Networks group at the University of Bristol in the UK. Dimitra is a leading academic in Optical Networks, Future Internet Research and Experimentation (FIRE), Grid and Cloud Computing, and one of the initial contributors of Transport Software Defined Networking. She has chaired a number of international conferences and committees across these technical fields. She is the author and co-author of over 350 invited and contributed publications of which many have received best paper awards, 11 patents and standards.

Rahim Tafazolli has been the Professor of Mobile and Satellite Communications at the University of Surrey since April 2000, Director of Institute of Communication Systems (ICS, formerly known as CCSR) since January 2010 and the Director of the 5G Innovation Centre since 2012. He has over 25 years of experience in digital communications research and teaching.  He has authored and co-authored more than 500 research publications and is regularly invited to deliver keynote talks and distinguished lectures to international conferences and workshops. He has also edited two books: “Technologies for the Wireless Future”, Vol.1 (2004) and Vol.2 (2006) both published by Wiley’s.

Stuart Revell is the Managing Director of RTACS Ltd and is currently working with the 5GIC University of Surrey on definition, external engagement and adoption of 5G and Internet of Things based technologies and architectures, especially research and usage in Transport, Health and Smart Cities. Stuart started his career as an Electronics Design Engineer and has spent over 30 years in the technology industry with experience in electronics and ICT R&D; ranging from Industrial Systems to complex ICT and Consumer solutions and has managed international teams covering both commercial and technical disciplines.

Andy Nix is Professor at the University of Bristol. During the 1990’s his WLAN research activities helped to form a significant part of the first WLAN standard (ETSI HIPERLAN). He continued to innovate in this area via a range of collaborative European Union (EU) projects, such as SATURN, WCAM and ROMANTIK. As a member of the OSIRIS project team (a £2.1M University Innovation Centre) he participated in the development of one of the world’s first hardware prototypes for a Multiple Input Multiple Output (MIMO) High Throughput (HT) WLAN. He works closely with industry, with well-known examples including BSKYB, BT, Dstl, Jaguar Land Rover, Nokia, Saab and Toshiba.

Mark Beach is Professor at the University of Bristol. He has established a world-leading multi-channel spatial-temporal measurement and analysis facility at Bristol, with an operational capability only matched by a few research centres across the global, with the outputs driving the channel models associated with the wireless standards for next generation WLANs, WiMax and 4G (3G LTE, ITU Advanced). His track record in this field and strong industrial collaborations also played a major role in attracting the University Innovation Centre in Communications, Computing and Content to Bristol (now known as 3CResearch Ltd.), where he led the collaborative development of a state-of-the-art MIMO enabled wireless test-bed.

Hamid Aghvami is Professor at King’s College London. He is the Founder and was the Director of the Centre for Telecommunications Research at King’s from 1994 to 2014. He is Fellow of the IEEE, RAE and IET. He carries out consulting work on Digital Radio Communications Systems for British and International companies; he has published over 550 technical journal and conference papers, and given invited talks and courses the world over on various aspects of Personal and Mobile Radio Communications. He was Visiting Professor at NTT Radio Communication Systems Laboratories in 1990 and Senior Research Fellow at BT Laboratories in 1998-1999.