For real-world performance predictions and system design, channel models should be accurate and intuitive, and should be based on repeatable measurements of how channels behave in reality. Better still, models should also have some basis in fundamental physics, since the laws of physics govern radio propagation and help buttress universal understanding of channel fundamentals over the vast mmWave spectrum. Accurate channel models are also needed to determine the signal processing architecture and requirements at both the transmitter and receiver [11] [12].

2. Comparison Between the 3GPP and NYUSIM Channel Models

There has been some controversy in the development of the 3GPP TR 38.900 Release 14 channel model for above 6 GHz [1]. For example, when it comes to modeling the large-scale path loss over distance across a vast range of mmWave frequencies, one group of researchers have sought to unify the path loss models above and below 6 GHz, using large collections of measurements and relying on physics to express path loss as a very simple one-parameter model based on Friis’ equation within the first meter of propagation for both line-of-sight (LOS) and non-LOS (NLOS) situations. This approach is given as the optional path loss model in 3GPP TR 38.900 Release 14 (see Pages 25-26 of [1], and [2]), yet some industry players have used a more cumbersome, sub 6-GHz legacy-based path loss model to attempt to explain propagation from 6 to 100 GHz. This approach not only lacks a physical basis with little to no better model accuracy despite more parameters, but creates a discontinuity at 6 GHz between sub-6 GHz standardized models, and newer models above 6 GHz. While the physics-based single-parameter model in [2] easily accommodates the 6 GHz boundary with no discontinuity from 500 MHz to 100 GHz [2] [3] [4] [5] [9], the 3GPP model requires three parameters and results in non-physics-based model parameters in many situations [2]. The ITU working group 5D is now considering both these models.1 (see Pages 25-26 of [1], and [2], [6]).

Some have thought that modeling the attenuation of buildings over the wide range of mmWave frequencies could be explained by a physics-based model that expresses attenuation as increasing with the square of frequency (parabolic), as found by Appleton for describing the refractive index of the ionosphere with frequency [7], [8]. A very simple yet accurate model for outdoor-to-indoor (O2I) building penetration loss (BPL) for high-loss and low-loss buildings that considers the quadratic increase in frequency is given by [9]:

However, industry participants in 3GPP have derived considerably more complicated BPL models with very comparable accuracy, as given in page 28 of [1], [9]:

where PLnpi is set to 5 dB as an additional loss added to the external wall loss due to various materials (which are detailed in [1]) to account for non-perpendicular incidence in the 3GPP TR 38.900 Release 14 channel model. Lmateriali is the penetration loss of material i, pi is the proportion of the i-th material, where Σpi = 1, and N is the number of materials. The O2I penetration loss models developed by NYU and 3GPP have similar performance and are given in Table 1.

More significant disagreements can be found between researchers when considering the wideband impulse response and spatial correlation properties of multipath channels. The 3GPP model has simply taken many of the small scale parameters that contribute to the impulse response from below 6 GHz, and extended them to the mmWave bands. This has in effect removed the sparsity property (i.e., the small number of delay-angle bins with high energy) observed in [4], [10]. Removing the sparsity property has an impact on the numbers of RF chains needed in hybrid beamforming to achieve SEs close to digital SE, and also on the size of the RF beamforming codebook.

This article illustrates where the 3GPP model fails to provide realistic performance prediction, since its model parameters do not mimic what happens in the real world. We show this by predicting SE in a very simple straw-man mmWave wireless network. Let us assume a single-cell single-user MIMO system without multiple-access interference, operating at 28 GHz with an RF bandwidth of 100 MHz in the UMi scenario. The base station is equipped with 256 antenna elements comprising a uniform rectangular array (URA) with cross-polarized elements that can reduce the hardware size and make better use of multipath components with different polarizations since the cross-polarization discrimination ratio is 8-9 dB in both models, where the antenna pattern on page 23 of [1] is adopted. The user equipment has 16 antenna elements constituting a URA with cross-polarized omnidirectional elements. Signal-to-noise ratios (SNRs) are fixed at certain values to investigate the SE achieved by the 3GPP [1] and NYUSIM [3] models. Two hundred random channel realizations using random distances ranging from 10 to 435 m were performed for each channel model, where the NYUSIM code runs about 30 times faster than the 3GPP code.

Fig. 1 illustrates the SE achieved by the hybrid beamforming algorithm proposed in [10] for a 256x16 mmWave system at 28 GHz with cross-polarized planar arrays at the transmitter and receiver for various numbers of data streams Ns, using the 3GPP and NYUSIM models. The four largest eigenvalues of the normalized channel matrices (where the Frobenius norm of the channel matrix equals 1) are depicted in Fig. 2. Key observations are as follows:

The SE generated by the 3GPP channel model is just slightly smaller than that yielded by the NYUSIM channel model for Ns =1, but much larger for Ns = 4. For instance, for an SNR of 20 dB and Ns = 4, the 3GPP SE (40 bits/s/Hz) is about 13 bits/s/Hz greater than the NYUSIM SE (about 27 bits/s/Hz). This is likely because NYUSIM yields one or two strong dominant clusters and much weaker non-dominant clusters, while the 3GPP model has less focused directional energy than what realistically exists.

For the 3GPP channel model, the SE increases significantly as Ns grows, while for NYUSIM, the SE does not increase much as Ns increases from 1 to 4, which indicates that the second, third and fourth strongest eigen-channels are much weaker compared to the first one in NYUSIM. Again, this is probably because the 3GPP model overestimates diversity than what is measured in the real world, likely due to the unrealistically large number of clusters assumed by 3GPP.

Fig. 2 shows the largest eigenvalue of the normalized NYUSIM channel matrix is much greater than 3GPP. For the second largest eigenvalue, most of the eigenvalues from 3GPP are larger than NYUSIM. For the third largest eigenvalues and the further weaker ones, the eigenvalues found using NYUSIM are much smaller compared to 3GPP. Again, this is due to 3GPP’s optimistic assumption of much greater diversity in the channel from a larger number of clusters, which has not been proven by measurements [2], [4], [5]. MmWave channels have been found to be sparse such that there are only a few dominant clusters, and the non-dominant clusters are substantially weaker. For a multi-user case when users are at the cell edge, only one or two streams per user will likely be possible, thus the sum SE with NYUSIM is likely to be much larger than with 3GPP. Further work is needed in this area. 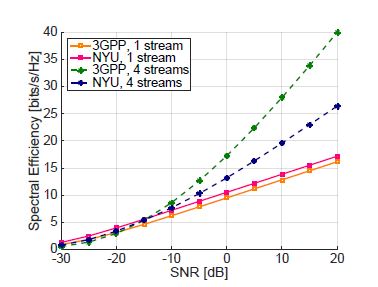 Fig. 1: Spectral efficiency achieved by sparse precoding and combining for a 256x16 system at 28 GHz with cross-polarized arrays at the transmitter and receiver with four RF chains. 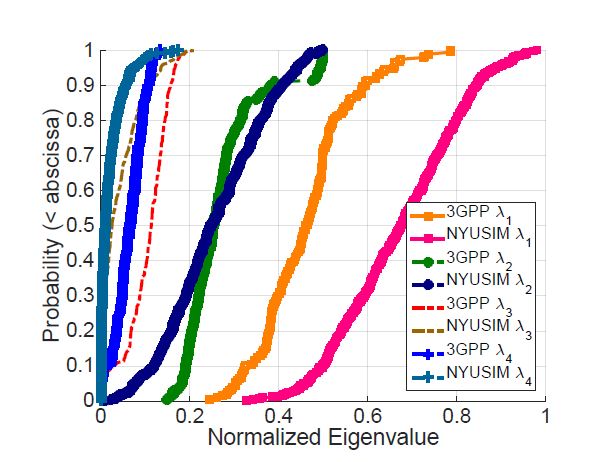 Fig. 2: Eigenvalue λ for a 256x16 system at 28 GHz with cross-polarized arrays at the transmitter and receiver.

The above work shows that the 3GPP channel model is optimistic when predicting diversity and the achievable SE at mmWave frequencies, and will yield unrealistic eigenvalue distributions for mmWave channels. The main cause is that the 3GPP channel model assumes up to 19 clusters (e.g., for UMi NLOS) and up to 20 rays per cluster, which is excessively large and not borne out by measurements reported thus far, which show greater sparsity. NYUSIM uses the models indicated above and is freely available for consideration by ITU and 3GPP. This could help avoid system errors inherent with legacy modeling approaches.

Theodore (Ted) S. Rappaport (Fellow, IEEE, This email address is being protected from spambots. You need JavaScript enabled to view it.) is a professor at New York University (NYU) and founder of NYU WIRELESS. Earlier in his career, he founded other major wireless research centers at The University of Texas and Virginia Tech, and co-founded two wireless companies that were sold to publicly traded companies. He is a technical expert and pioneering researcher in the field of wireless communications, and his work has led the world to accept and adopt millimeter wave for 5G fixed and mobile wireless communications.

Shu Sun (Student Member, IEEE, This email address is being protected from spambots. You need JavaScript enabled to view it.) received the B.S. degree in applied physics from Shanghai Jiao Tong University in 2012 and the M.S. degree in electrical engineering from the NYU Tandon School of Engineering in 2014. She is currently working toward the Ph.D. degree under the supervision of Prof. Rappaport in NYU WIRELESS. Her current research interests include mmWave mobile communications and mmWave MIMO systems.

Mansoor Shafi (Life Fellow, IEEE, This email address is being protected from spambots. You need JavaScript enabled to view it.) received the B.Sc Eng degree and the Ph.D degree both in Electrical from the University of Engineering and Technology Lahore and University of Auckland respectively in 1970 and 1979. He is currently a Telecom Fellow (Wireless at Spark NZ) and an Adjunct professor at Victoria University, School of Engineering. His research interests include radio propagation, the design and performance analysis for wireless communication systems, especially antenna arrays, MIMO, cognitive radio, massive MIMO and mmWave systems.