A Functional Overview on CUDA and DUDA

The wireless communication network, especially 5G, is coming to an era of Big Data (BD). This article explores the feasibility to apply Data Analytics (DA) into CU-DU (Central Unit-Distributed Unit) architecture adopted by 5G New Radio (NR), and presents possible functional designs for CUDA and DUDA separately, aiming at giving heuristic considerations on the combination of ICT and DT.

The data services provided by wireless networks produce vast volume of data with the rapid growth of mobile devices. As surveyed by [1], the annual growth rate for the data generated by mobile devices will be over 40%; with the introduction of Internet of Things (IoT) provisioned by the next generation mobile networks, the rate of growth will be even higher. As a consequence, the Wireless Big Data (WBD), which applies Data Analytics (DA) into the wireless communication domain, is proposed and adopted as one of the most promising directions for wireless networks, especially for 5G [2]-[3]. According to the current progress of 3GPP, the concept of Network Data Analytics (NWDA) has been adopted by 3GPP SA2 [4] to optimize the system performance of 5G Core Network (CN). The adoption of NWDA by 5G CN inspires the work to explore the necessity and feasibility to apply DA into 5G Radio Access Network (RAN), namely 5G New Radio (NR).

Different from LTE, NR raises CU-DU architecture, which provides more capability, flexibility and scalability compared to 4G RAN architecture. As indicated by [5], 3GPP RAN3 listed 8 functional split options on the protocol stack in order to achieve a standard split for the CU-DU architecture. After the discussion, the functional split Option2 (PDCP/RLC split) has been adopted as the standard higher layer split for 5G NR, because Option2 only requires limited transport bandwidth with comparable performance and little normative work.

Based on the above agreement, it is possible to investigate the application of DA in NR. As a result, the concepts of CUDA and DUDA are proposed and included in CU and DU respectively. This article gives possible designs for CUDA and DUDA from functional perspective, with further analysis on the necessity and feasibility to introduce BD technology into CU-DU architecture, aiming at optimizing the system performance to satisfy the requirements of 5G NR.

The following two sections provide detailed descriptions on the functional designs of CUDA and DUDA.

2. The Functional Design of CUDA

In legacy LTE, the RRM algorithms are only used for the control-related functions; and the CP-controlled UP (User Plane)-related / MP (Management Plane)-related functions are not necessarily required, because the configurations on UP-related parameters are mainly based on the QoS profile sent from CN, and the configurations on MP-related parameters are in the charge of OAM (Operation, Administration and Maintenance); while in 5G NR, since the stringent performance requirements leads to the modification of the protocol stack, RAN should adopt some specific UP/MP-related functions within the scope of RAN.

For example, as indicated by [6], RAN2 has agreed to add a new UP sub-layer called SDAP (Service Data Adaptation Protocol) [7], which is responsible for the mapping of QoS flow to DRB (Data Radio Bearer), on top of PDCP. With the introduction of the SDAP layer, how to assign a QoS flow to the proper DRB becomes necessary, which is suitable to be solved as the CP-controlled UP-related function. In addition, with the introduction of CU-DU architecture, the number of the connected DU for each CU is configurable. Therefore, how many DUs should be configured for a specific CU can be determined with the CP-controlled MP-related function.

The position and the possible design of CUDA are shown by Figure 1. Generally speaking, CUDA consists of DA Database (DAD) and DA Function (DAF) blocks, which extends the legacy RRM Database and legacy RRM Function respectively in CU. The description of each extended block is given as below.

DAD is comprised of three functional modules. Besides the legacy RRM database as in LTE, new modules including AI (Artificial Intelligence) database and Model Training are also introduced. AI database provides the data format for the Model Training and supports the AI methodologies such as retracing, coupling/decoupling, and self-growing of WBD. In retrospect, the Model Training module provides training results back to the AI Database as long-term statistical references.

DAF extends the legacy RRM functions, and introduce UP and MP related functions for performance optimizations. Moreover, the enhancements on RRM functions are proposed to achieve more accurate resource allocations with the aid of BDC (Big Data Computing) and AI (i.e. the model training) for CP.

UP functions mine user packets including the average packet size, inter-arrival time between packets, latency of the traffic and minimum/maximum bit rate to train the service model, which are used for analyzing and predicting service streams to achieve better QoS support of users. The descriptions of feasible UP functional blocks are given as follows,

MP functions focus on the flexible connections of network infrastructure on the RAN side to make proper adjustments based on the amount of users, throughput of the air interface, and operators’ strategies, etc. The MP functional blocks are described as follows,

In summary, CUDA extends the original CP related RRM functions to the UP and MP, enabling more accurate management at different levels. Note that all of the extended functions shown in Figure 1 are suitable to be achieved by RAN other than CN and OAM. These functions are carefully considered as the enhancement with the aid of DA compared to the legacy LTE. 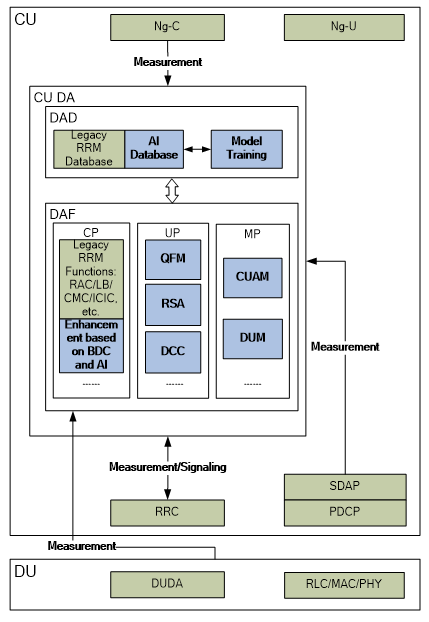 Figure 1: The design for CUDA

3. The Functional Design of DUDA 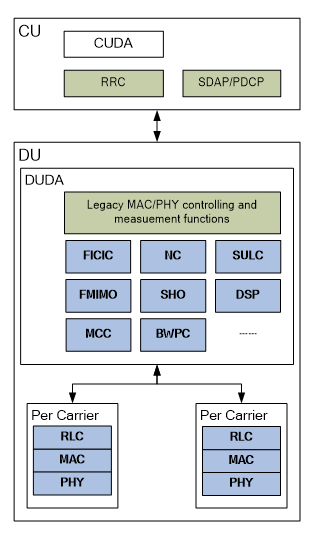 Figure 2: The design for DUDA

DUDA is mainly driven by BDC to ensure the real-time processing of the protocol stack in DU, i.e. achieving the real-time controlling operations at TTI level. Besides legacy controlling and measurement of PHY and MAC, the CP functions in DU can be extended as follows,

The UP function in DU analyzes the instant data transmission within each DRB to achieve more accurate modifications of parameters related to the air interface. The possible functional block of UP is described as follows,

In summary, DUDA improves the accuracy of lower layer controlling and data processing on the air interface. Compared to the classical protocol stack implemented on DU, DUDA introduces the BDC to ensure the real-time performance.

With the deeper combination of ICT and DT, the WBD is introduced and treated as a solution to improve the system performance for 5G NR. This article explores possible functional designs for CUDA and DUDA, and gives brief descriptions for each extended functional block in CU-DU architecture, targeting for inspiring further applications of DA into 5G technology.

Chih-Lin I received her Ph.D. degree in electrical engineering from Stanford University. She has been working at multiple world-class companies and research institutes leading the R&D, including AT&T Bell Labs; Director of AT&T HQ, Director of ITRI Taiwan, and VPGD of ASTRI Hong Kong. She received the IEEE Trans. COM Stephen Rice Best Paper Award, is a winner of the CCCP National 1000 Talent Program, and has won the 2015 Industrial Innovation Award of IEEE Communication Society for Leadership and Innovation in Next-Generation Cellular Wireless Networks.

In 2011, she joined China Mobile as its Chief Scientist of wireless technologies, established the Green Communications Research Center, and launched the 5G Key Technologies R&D. She is spearheading major initiatives including 5G, C-RAN, high energy efficiency system architectures, technologies and devices; and green energy. She was an Area Editor of IEEE/ACM Trans. NET, an elected Board Member of IEEE ComSoc, Chair of the ComSoc Meetings and Conferences Board, and Founding Chair of the IEEE WCNC Steering Committee.

Sun Junshuai received the M.S. degree in CST from Xidian University, Xi’an, China, in 2005. From 2005 to 2013, he worked in CATT as a TD-SCDMA/TD-LTE L2 engineer, SE, team leader and the director of high layer technology department. Since 2013, he has worked as a researcher in CMRI. He has great R&D and industry experience in both telecommunication and radio resource management, based on which he puts forward MCD (Multiple centralized and distributed) design logic of the protocol stack. His current research interests focus on the architecture and functionalities of wireless protocol stack.

Xingyu Han received the Ph.D degree in electronic engineering from the department of EECS, Queen Mary University of London, UK, in 2016. Since 2017, he has been working as a researcher and project manager in Green Communication Research Center of China Mobile Research Institute, focusing on promoting the development of the protocol stack for 5G NR and beyond. He is now tracking the progress of 3GPP RAN2&3 and contributing to the related Working Groups. His current research interests include the system design of the protocol stack, the innovation of RAN architecture and the application of Wireless Big Data.

Wang Yingying received the B.S. degree and M.S. degree in Communication and Information System from Xidian University, Xi’an, China, in 2007 and 2010. From 2010 to 2015, she worked in NPC and Spirent as a senior LTE L2 software engineer. Since 2015, she has worked in CMRI as a Wireless access network researcher. She has great research and industry experience in telecommunication. She focuses on the architecture and functionalities of wireless protocol stack of RAN.

Huang Xueyan received the master degree in wireless communication from Beijing University of Posts and Telecommunications, Beijing, China, in 2015. From October 2015 to 2018, she was a protocol researcher of China Mobile Research Institute, focusing on user plane protocol stack research. She has more than one year 3GPP experience, and mainly follows RAN3 CU/DU architecture/interface and RAN2 user plane function design and optimization.