5G will bring great changes to wireless communications—and, by extension, the Internet of Things and all of the industrial, automotive and other application areas that rely on the technology. Control for the Radio Frequency Front-End of the wireless components that enable these application areas is an important element to bring order to the 5G story. The MIPI Alliance, an international organization that develops interface specifications for mobile and mobile-influenced industries, recently updated its MIPI RF Front-End Control Interface—MIPI RFFE—with emphasis on supporting the next wave of 5G applications around the world.

To realize the anticipated impact of the fifth generation of technology standards for cellular networks, it is important to focus on and anticipate the needs of the Radio Frequency (RF) marketplace today.

The RF front end is an important aspect of 5G and wireless communications. The RF subsystems that connect to the modem baseband and/or RF integrated circuit transceiver—antenna tuners, filters, low-noise amplifiers (LNAs), power amplifiers, switches—rely on the RFFE control architecture. The MIPI Alliance RF Front-End Control Interface (MIPI RFFE) is deployed in virtually every device with cellular connectivity that is being manufactured around the world [1].

Version 3.0 of the MIPI RFFE specification, released in May 2020 [2], was streamlined and optimized to deliver the functionality that system architects, original equipment manufacturers (OEMs), and device vendors need to advance new 5G use cases across the Frequency Range 1 (FR1) of traditional sub-6 GHz cellular bands. 5G renders the RF front-end with a significantly more complex and challenging environment to orchestrate; however, MIPI RFFE simplifies configuration, integration and multi-vendor interoperability across the wireless components enabling the Internet of Things, industrial, automotive and other application areas leveraging 5G networks.

MIPI RFFE is emblematic of the types of core standard interfaces that MIPI Alliance was formed in 2003 to design, enabling mobile device manufacturers to source components from multiple vendors, optimize their devices and accelerate rollout to end users.

MIPI’s founding came at a critical juncture in the evolution of the RF marketplace. While there was clearly a market for smart, multimedia handsets, product design and development were hindered by industry fragmentation across essential interface technologies. Four companies—ARM Limited, Nokia Corporation, STMicroelectronics, and Texas Instruments Incorporated—founded the MIPI Alliance to consolidate interfaces. Four more companies—Intel Corporation, Motorola, Inc., Philips and Samsung Electronics, Co.—joined within a year. Working groups were formed, and MIPI’s first specifications—facilitating the interconnection of cameras, displays and modems to application processors—were introduced.

By 2008, the MIPI Alliance had grown to 150 members representing all facets across the mobile ecosystem, from semiconductor firms to OEMs. Seven more specifications were introduced, addressing a range of essential needs. The MIPI RF Front-End Control Working Group was formed during this time to address the specific needs of the RF front end.

Today, the MIPI Allance numbers more than 325 members. Dozens of MIPI specifications [3] serve six types of interface needs in a device: physical layer, multimedia, chip-to-chip/interprocessor communications (IPC), device control and data management, system debugging and software integration. Each specification is designed to deliver the fundamental performance characteristics of low power to preserve battery life, high bandwidth to enable feature-rich, data-intensive applications, and low electromagnetic interference (EMI) to minimize interference among radios and device subsystems. All of the world’s major chip vendors rely on MIPI specifications, and its specifications are utilized in hundreds of millions of smartphones.

When the MIPI RF Front-End Control Working Group was formed, many vendors were making multiple versions of the same device just so they could operate within the different environments of various OEMs.

MIPI RFFE is deployed across handsets, smartwatches, automobiles and other devices using wireless connectivity worldwide. As RF front-end designs have grown steadily more complicated with more components to be linked and synchronized, the interface has been regularly updated over the years to address new market opportunities and challenges.

4. Moving Into Application Spaces Beyond Mobile

5G evolution has increased the complexities for RF control. Higher-order multiple-input/multiple-uutput (MIMO) resource sharing introduces new complexities for the system architects. Timing budgets are shortening. The data rates of 5G complicate control of the RF front end from a number of perspectives:

“Smartphones and tablets have conditioned people to expect that they can have access to any information they want instantly, anytime and anywhere. Fast wireless network technologies such as LTE and IEEE 802.11ac are helping to meet that expectation. Fifth-generation cellular standards will raise the bar for designers tasked with enabling such instant gratification, by pushing download speeds into the Gigabit per second range and latencies into single-digit milliseconds.

This combination of rising user expectations and continuous network improvements creates major challenges for systems designers, who must find ways to keep their devices from becoming the bottleneck. …”

The new version of MIPI RFFE streamlines and refines the specification, enabling the more nimble configuration changes within and across RF subsystems that 5G demands through enhanced and expanded “trigger” functionality. See figure 2. Triggers basically give the RF subsystem the ability to configure multiple RF devices with very tight timing control and have been a key feature of MIPI RFFE since its initial release. But, to adapt for the smaller reconfiguration windows and enable lower-latency switching among various bands and band combinations defined in the 3GPP 5G standard, the working group in v3.0 specified a larger set of complementary trigger features for synchronizing and scheduling register-setting changes. 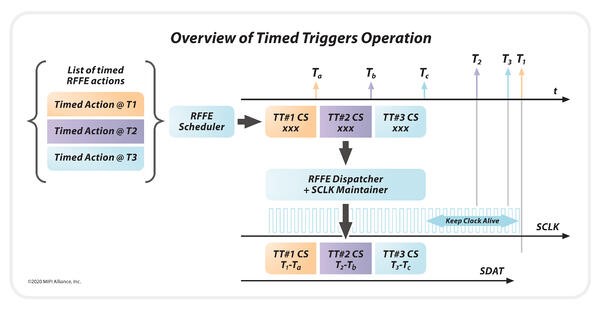 MIPI RFFE v3.0 is backward compatible with prior versions of the RFFE specification, so OEMs and device vendors can migrate systems without overhauling the interface’s physical layer to pursue the 5G business opportunities of today. The RFFE working group is discussing proposals for the next version of the specification, which will be intended to address the challenges that the Frequency Range 2 will introduce, and anticipate possible 6G network evolution requirements for the RF front end.

The working group always is looking for additional contributors and new ideas. In particular, we are seeking more input from the system side of the RF industry. Please learn more and engage.

A long-time member of the MIPI Alliance, Jim Ross has been active on the RF Front-End Control Working Group since its inception in 2008 and has served as its chair since 2011. Prior to that he was vice chair of the group from 2008 to 2011.

Mr. Ross serves as technical director for the mobile solutions business at Skyworks Solutions, Inc. (Nasdaq: SWKS) an innovator of high-performance analog semiconductors connecting people, places and things. In this role, he is the technical lead and designer for the digital content of Skyworks products specific to the MIPI RFFE interface for all of the Company’s business units. A digital designer in the communications industry since 1992, he previously worked in design engineer roles at Conexant Systems and Rockwell Collins.

Mr. Ross received his Bachelor of Science and Master of Science degrees in electrical engineering at the University of North Dakota.