1. What is Massive MIMO?

Massive MIMO is the currently most compelling sub-6 GHz physical-layer technology for future wireless access. The main concept is to use large antenna arrays at base stations to simultaneously serve many autonomous terminals, as illustrated in Figure 1. The rich and unique propagation signatures of the terminals are exploited with smart processing at the array to achieve superior capacity. Massive MIMO splendidly offers two most desirable benefits: 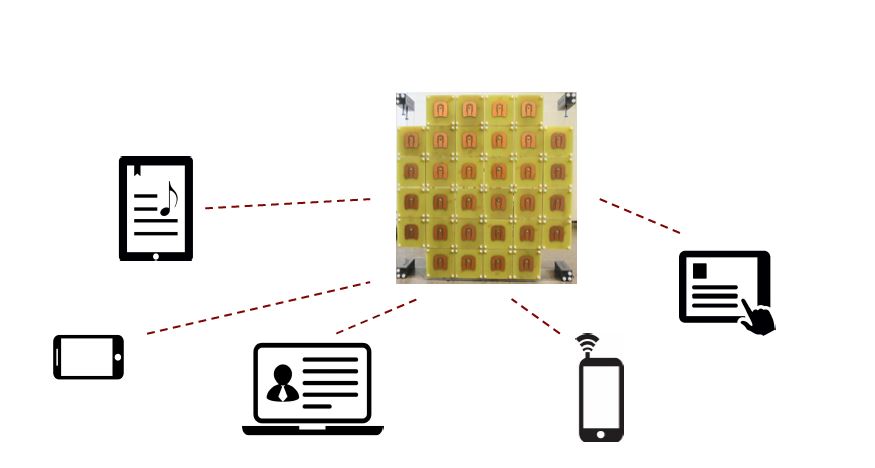 The key technological characteristics of Massive MIMO are:

The attractive properties of propagation -- penetration of solid objects and diffractive behavior -- and the maturity of hardware renders Massive MIMO primarily a below-6 GHz technology for radio access. This is also the region where spectrum is most valuable. Arrays have attractive form factors even for large numbers of antennas: in the 3.5 GHz TDD band, a half-wavelength-spaced rectangular array with 200 dual-polarized elements is about 0.6 x 0.3 meters large; in practice, larger antenna spacing may be desired and is easily afforded. However, systems operating at higher frequencies up to millimeter-waves may also benefit from the application of Massive MIMO, especially when these systems would need to support multi-user access in potentially non-Line-of-Sight scenarios.

2. What is Massive MIMO not?

Various large antenna systems are investigated and deployed in the quest for higher capacity and robust wireless access solutions. "Full dimension", "3D beamforming", and "grid-ofbeams" concepts, that rely on FDD operation or even hybrid beamforming, are sometimes marketed as Massive MIMO. Such solutions are less scalable with respect to the number of antennas, and importantly, they rely on specific properties of propagation or user location that limit their application to a substantial extent.

Point-to-point MIMO solutions with large arrays at the transmitter and/or receiver also are not Massive MIMO: Massive MIMO truly entails multiuser MIMO, relying on channel state information obtained through measurements on uplink pilots. Versions that operate in FDD and rely on the transmission of downlink pilots followed by subsequent fast CSI reporting by the terminals are also possible, but only in scenarios with relatively low mobility and small numbers of base station antennas.

3. Why is Massive MIMO Becoming a Reality Right Now?

Since its inception about a decade ago, the Massive MIMO concept has evolved from a wild "academic" idea to one of the hottest research topics in the wireless communications community, as well as a main work item in 5G standardization.

The time for Massive MIMO has come at this moment for two reasons: First, conventional technology has proven unable to deliver the spectral efficiencies that 5G applications are calling for. Second, the confidence in the exceptional value of the technology has spread rapidly since impressive real-life prototypes showed record spectral efficiencies, and the robust operation with low-complexity RF and baseband circuits has been substantiated [3].

4. What are the Operational Limits of Massive MIMO?

Massive MIMO is scalable with respect to antennas; additional antennas always help. The ultimate limit is dictated by mobility: every coherence interval (coherence time multiplied by coherence bandwidth) needs to accommodate uplink pilots, and payload in the uplink and downlink directions. The higher mobility, the less channel coherence and the fewer pilots can be afforded. In high-mobility macro-cellular environments (highway), this limits the multiplexing gain to some dozen of terminals but in environments with less or no mobility, hundreds or even thousands of terminals could in principle be multiplexed. The number of antennas that ultimately prove useful scales similarly, and are likely to be limited to one or a few hundred in macro-cellular, but potentially thousands in low-mobility applications [4].

5. Will Massive MIMO Work in Practice?

Massive MIMO does work in practice! It has been demonstrated to achieve a record spectral efficiency of 145 bps/Hz in a real-life testbed experiment with 100 antennas at the base station. This demonstration does show an improvement of more than 20 times over 4G systems, yet was achieved in a controlled lab environment. Adding more antennas to the base station and deploying more dedicated hardware could support more simultaneous users. Efficient operation has been validated in a wide range of propagation conditions including indoor and outdoor situations. The solutions to compensate for non-reciprocity of front-ends in TDD-based channel estimation have been confirmed to be robust. Recently the proof was extended to true mobile access: communication with pedestrians and cars can be maintained. These experiments show that channels can be tracked sufficiently fast to spatially multiplex moving users [4].

In parallel, hardware implementations have been progressed very favorably. Fore mostly, it has been technically proven that Massive MIMO systems can be built with very low complexity hardware, both for the digital baseband and the analog RF chains. Moreover, innovative architectures and circuits that exploit the specific nature of Massive MIMO systems are being designed. These will further reduce power and cost and promote an attractive deployment of Massive MIMO systems [8].

6. What Could Massive MIMO Offer More in the Future?

Massive MIMO can offer enhanced broadband services in the future, and more. 5G networks are expected to support a great variety of wireless services in areas ranging from infotainment to healthcare, smart homes and cities, manufacturing, and many others. Massive MIMO technology can be tailored to support a massive number of Massive Machine Type Communication (MTC) devices. Also, it is an excellent candidate to realize Ultra Reliable Communication as it can establish very robust physical links.

Erik G. Larsson (This email address is being protected from spambots. You need JavaScript enabled to view it.) is Professor at Linköping University, Sweden, and Fellow of the IEEE. He co-authored the textbook Fundamentals of Massive MIMO (Cambridge University Press, 2016). He received the IEEE Signal Processing Magazine Best Column Award twice, in 2012 and 2014, and the IEEE ComSoc Stephen O. Rice Prize in 2015.

Liesbet Van der Perre (This email address is being protected from spambots. You need JavaScript enabled to view it.) is Professor at KU Leuven, Belgium and guest Professor at Lund University, Sweden. She was with imec in Belgium from 1997 till 2015. She was appointed honorary doctor at Lund University, Sweden, in 2015. She received her Ph.D degree from KU Leuven, Belgium, in 1997.